Alternative Madrid: 5 tips from a local

Madrid is popularly known by its architecture and history, but we know the more adventurous traveler is interested in experiencing the alternative side of Madrid.

You might have heard that Reina Sofia is the modern art museum in town, and El Prado is the classical one. Both of them are super nice, don't get us wrong, but do they really represent the alternative Madrid?

This former tobacco factory from the 19th century currently hosts workshops & events organized by local artists during the weekends. Are you interested in learning salsa dance or how to create your own longboard? These are just some examples of what you'll be able to do for free, but there is more to do: Street art workshop at El Keller, Fixing your own bike at Recicletos, Reggae & dancehall at the main stage.

The entrance to Tabacalera de Lavapiés is located right across Calle Embajadores, 53 but before getting here you should walk around the district. Lavapies is probably one of the most unique areas for the alternative side of Madrid but still quite unknown.

It's famous for contemporary art galleries in Calle Doctor Fourquet, Indian, Moroccan and Senegalese restaurants and the San Fernando market (the opposite idea to San Miguel market).

There are two spots that me and my team from Cooltourspain (specialists in street art tours in Madrid, for example a Street Art Bike Tour) recommend you. The first one is La Neomudejar.

La Neomudéjar: An avant-garde center located next to the biggest and most important train station in Spain. This 19th century building was formerly used as a warehouse by the first train line created in this Mediterranean watered country: MZA (Madrid, Zaragoza and Alicante).

It now hosts artistic and queer residencies. Among others, these are the different artistic movements exhibited: Brut art, Visual arts and Street art.

Matadero Madrid: As you may have read along this text, all these locations that we are sharing used to have a different purpose than the one they have now. In this case, Matadero means 'slaughter house' in Spanish. Consequently no further details are needed.

What we should mention is that Matadero is probably the most alternative Madrid cultural center within the city centre. You should definitely check it out, ending up your visit with a nice walk along the Manzanares River.

Park that represents the alternative sive of Madrid

We could mention for instance Esta es una Plaza or Solar Antonio Grilo but the one that really deserves a singles space in this article is...

Parque de las Siete Tetas: Parque del Cerro del Tio Pio is the original name, but everybody in town calls this park “Las siete tetas”. Seven boobs did you say? Yes, you read correctly. This is a seven-hills park which offers its visitors the best panoramic view in town. You will observe all the city center from here. FYI, this is a special place for its sunsets. 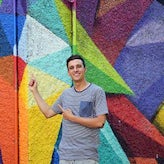 I'm a street art entrepreneur and love painting graffiti letters. I want to provide a cultural, social, and educational opportunity to approach the street art and graffiti industries in Madrid.

Our tips in Madrid

Discover the best street art of Madrid with a passionate guide

$36.95 Per person
All tours & activities in Madrid