Admire the 19th century grandeur, for example the huge dome above the waiting hall. This dome with its 75 meters is the highest point of the station. No costs were spared for this sumptuous building, as more than 20 types of marble and stone were used. Walk through the front hall and marvel at the magnificent architecture.

This "Railway Cathedral" (also known as the 'Middenstatie') on the Koningin Astridplein is the third station built on this site and was inaugurated on 11 August 1905. Until 2007 it was a so called 'kopstation': trains that arrived had to leave in the opposite direction after arrival. But after a very large-scale renovation, trains no longer have to turn around and the high-speed line can run through Antwerp.

Near the Central Station you will find the diamond district, the heart of the Antwerp diamond industry. Visit the many diamond cutting shops, showrooms or the Diamond Museum and learn more about the world's largest diamond city.

See the highlights & hidden secrets of Antwerp by kick scooter

Enjoy a private bike tour through Antwerp, customized to your wishes 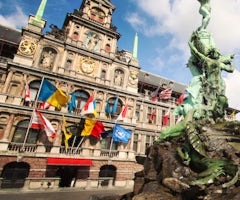