The Grote Mark (Great Market Square) is a triangular square and the centre of Antwerp. It is the ideal starting point for visiting some of the popular sights in Antwerp. On sunny days, the terraces can be a bit overcrowded though. The square is dominated by the tower of the Cathedral of Our Lady and the Town Hall. This Town Hall was built between 1561 and 1564 in Renaissance style with both Flemish and Italian influences. Take a look at the upper part of the facade: clearly Flemish.

The interior of the City Hall is well worth a visit. There are beautiful rooms, such as the Leyszaal with its large frescoes and the Trouwzaal (Wedding Hall) with paintings of weddings from different moments in time.

The guild houses on the north side of the square are very interesting to study. These guild houses are not original. Most of the houses burned down in 1576 and were then reconstructed. The largest house is "Het Pand van Spanje", number 7, with a striking statue of Saint George and the Dragon. Saint George is about to defeat the dragon and the dragon can just cling to the facade.

The fountain on the market is decorated with a statue of the Roman soldier Silvius Brabo. This is linked to a legend about the origin of the name of the city. The giant Druoon Antigoon took a heavy toll on the boatmen on the Scheldt. Druoon cut off the hands of anyone who was unable or unwilling to pay. Silvius Brabo resisted the giant, defeated him and made Druoon suffer the same fate as his victims: Brabo cut off Druoon's hand and threw it into the Scheldt. So Antwerp comes from 'hand throws'. At least, according to this legend. It is more likely that the name is derived from 'de aanwerp', a sandbank in the Scheldt. 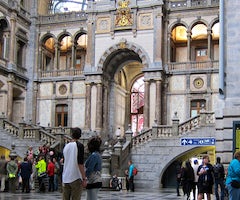